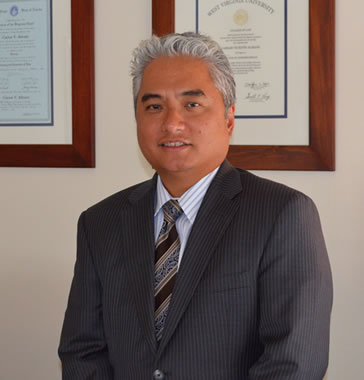 Caesar Almase obtained his law degree from the West Virginia University College of Law, and after graduation was licensed to practice law in Nevada.

He started his legal career as the law clerk to Valorie Vega, District Court Judge for the Eighth Judicial District Court of Nevada. Following that clerkship, Caesar became an associate in the civil litigation firm of Bremer, Whyte, Brown, and O’Meara, where he was assigned to defend personal injury, construction defect, and general litigation cases.

After his time as a civil litigator, he went on to become a deputy public defender for Clark County, Nevada. In nearly five years, Caesar handled thousands of criminal cases, ranging from simple misdemeanors to serious felonies. He gained invaluable criminal law experience in nearly all types of criminal cases, including: misdemeanor and felony DUI, misdemeanor and felony Battery Domestic Violence, Casino Markers, Drug Possession, Forgery, white-collar Fraud, and Robbery.

After his stint in the Public Defender’s Office, Caesar went on to private practice. First partnering with his wife Heidi Almase, then when she was elected as a Las Vegas Municipal Court Judge, teaming up with George Trachtman, Esq. Caesar has since gone on to being a solo practitioner, focusing exclusively on criminal law matters. As a private criminal defense attorney and former deputy public defender, Caesar has handled virtually every type of felony and misdemeanor case and has represented countless individuals from all walks of life. He is diligent in defending his clients, and will do everything in his power to obtain the very best result for them.

When not working or spending time with his family, Caesar enjoys being active in the Las Vegas community. He is on the Board of Directors and is legal counsel to Fil-Am POWER, a grassroots political group dedicated to the service of Filipinos in Clark County. He is legal advisor to Shine Family Foundation, a nonprofit organization that assists families of the US military, which includes holiday food and gift drives. He has served as president of HOPE For Prisoners, a nonprofit re-entry and rehabilitation program for exfelons. He is also a member of Las Vegas Lions International, and the Filipino American Chamber of Commerce of Greater Nevada.