What is Open and Gross Lewdness? 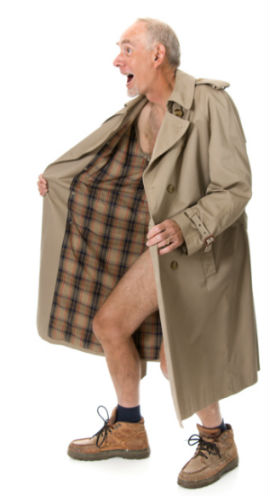 Joe Pheely and a posse of buddies head to the nightclub to celebrate his big promotion. To get the mood right, Joe and his pals slam a few shots and decide to move to the dance floor. Joe, having a good time, starts dancing with a group of ladies when he sees a beautiful brunette, give him what he thinks is the “eye.” Joe corners the woman, showing her his best dance moves, but than begins to get a little touchy. He fondles her breasts and gropes her butt. The lady is clearly not pleased and begins to make a scene. Before Joe even knows what happened, a bouncer interferes and Metro is called. Joe Pheely is arrested and charged with Open and Gross Lewdness.

Stan Moustache was walking down the street when a car full of beautiful, young women came to a stop at a red light. Stan decided that the best way to woo them was to show them, what he believed, was his large “package.” Stan unbuttoned his pants and proceeded to do the windmill dance. Appalled, the women drove away. Unfortunately for Stan, a Metro officer watched the entire incident unfold and arrested Stan for Open and Gross Lewdness.

Harry and Wendy live across the street from an elementary school in a lovely single story home, with lots of windows. One day, Harry comes home early, excited to tell Wendy about his promotion. Celebrating the right way, Harry and Wendy rip off all their clothes and begin having sex on the living room couch. So eager to get busy, Harry and Wendy forget to close the curtains. Sadly for the happy couple, school just let out and several small children, with their parents in tow, witness the coital celebration. Unsurprisingly, Metro pays a visit, ruining the couple’s happy afterglow.

What are the consequences?

Joe Pheely crossed a serious line when he progressed from dancing to groping. Joe will be charged with Open and Gross Lewdness. It is not a requirement that any other person witnessed his lewd behavior on the dance floor, merely that it was in an open manner, and could have been observed by others who would have been offended. Regarding Stan, his conduct was certainly in a public place, in full view of his victims (and anyone else who was unfortunately present), and was certainly of indecent. Although the conduct of Harry and Wendy was completely unintentional and in their private residence, their conduct was open to public view and sexual in nature.
Joe, Stan, Harry, and Wendy have all committed a sexual offense pursuant to NRS 179D.097(j). This means that they may all be required to register as sex offenders and endure lifetime supervision under NRS 176.0931(1). This is a PUBLIC registration and results in your home address being PUBLIC information. Even accidental conduct falling under this offense, like the unintentional exposure of Harry and Wendy, is not a joke – it is very austere but Almase Law can help.

What to do if you’ve been charged with open and gross lewdness?

Open and Gross Lewdness is a serious crime that carries serious punishment. However, a good attorney can potentially get a reduction to a simple misdemeanor charge of Disturbing the Peace under NRS 203.010, with a small fine or community service. This is a charge given for willfully disturbing the peace, and will likely not hinder or hurt your future, unlike a conviction of Open and Gross Lewdness which requires registration as a sex offender. It is possible that an experienced attorney can negotiate your charge down or successfully litigate a dismissal. For this reason, it is essential that you give us a call at Almase Law.