Drinking and Driving: What Are Your Rights? 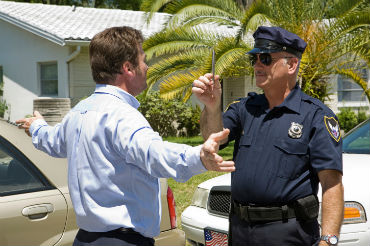 Driving Under the Influence (NRS 484C.020) or DUI is arguably one of the most common crimes I see. Despite how common DUI may be, its implications are serious and can include jail time. While the legal limit for adults in Nevada is a .08 blood alcohol level, police officers can only conclusively determine this after administering a breath or blood test. But can police officers just stop and test anyone?

As was referenced in another article, Stopped and Searched on the Las Vegas Strip, Was it Legal, according to N.R.S. 171.123(1) a police officer may, “detain any person whom the officer encounters under circumstances which reasonably indicate that the person has committed, is committing or is about to commit a crime.” Similarly, a police officer may stop a vehicle and briefly detain a motorist when he has “at least [an] articulable and reasonable suspicion.”[ Delaware v. Prouse, 440 U.S. 648 (1979). ] Reasonable suspicion that a motorist may be impaired to drive could be as harmless as straddling the centerline, drifting from one lane to another, or even extremely slow and irregular driving.

Once an officer has pulled a motorist over, he may ask them to participate in a field sobriety test (FST). Common field sobriety tests measure balance, coordination, and the driver’s ability to divide his or her attention among several tasks at once. Although the test is optional, refusing to perform an FST may be deemed evidence of probable cause to arrest the driver and will be the basis for the officer to request the driver take a breath or blood test. For more information on probable cause as it relates to searches and arrests, please see our prior blog Probable Cause; The Standard for Search and Arrest.

If you refuse to take a field sobriety test, can officers force you to take a breath or blood test? Not exactly. According to the U.S. Supreme Court:
“[the] natural metabolization of alcohol in the bloodstream does not present a per se exigency that justifies an exception to the Fourth Amendment’s search warrant requirement for nonconsensual blood testing in all drunk-driving cases, and instead, exigency in this context must be determined case by case based on the totality of the circumstances.” [ Missouri v. McNeely, 133 S. Ct. 1552 (2013).]

In other words, unless it is a rare circumstance that presents an emergency need for a blood sample, a search warrant is required to administer a breath or blood test. This typically means a police officer cannot draw your blood or force you to take a breath test without first obtaining a search warrant. The officer must contact an available judge and recite to him or her the basis for probable cause, and only if that judge agrees probable cause exists, will a breath or blood test be forcibly administered to the driver suspected of being under the influence. Moreover, under Nevada law, the police must administer the breath or blood test within two hours of the time establishing the driver was operating or in physical control of the motor vehicle; otherwise, the defense can argue the breath or blood test should not be allowed into evidence.

Although driving under the influence may be a common crime, it is not something to be taken lightly. A first conviction can result in a revoked license for 90 days and mandatory drug and alcohol counseling; a second conviction may result in a one-year revocation of the driver’s license and more stringent counseling; and a third conviction will result in mandatory prison incarceration. These penalities are in addition to the hefty fines imposed on those found guilty of DUI. If you have been arrested for a DUI, call us immediately at Almase Law.
Remember:

« Probable Cause: The Standard For Search And Arrest » Marijuana: Is It Really Decriminalized?