Stopped and Searched on the Las Vegas Strip, Was it Legal? 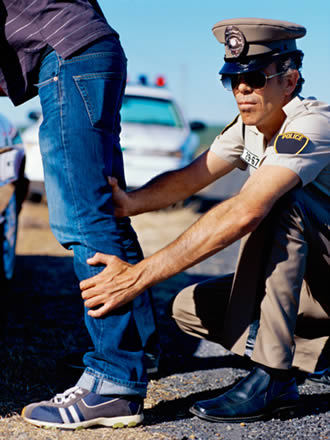 Have you been wrongfully stopped and searched on the Las Vegas Strip? Did you get busted for possession of a controlled substance, commonly known as drugs? Here at Almase Law, we regularly defend these cases and are often asked what exactly does the law permit officers to do. If the story below sounds familiar, give us a call at Almase Law.

“I was walking down Las Vegas Blvd…

Right in front of the Bellagio fountains, when two Metro Officers in plain clothes stopped and asked me for my ID. They told me that they were searching for John Doe, a robbery suspect, and I matched the description. I gave the cop my ID. and then he immediately started searching through my sweater and pants. As he was searching my pockets, he found a couple of dime bags of meth. Then they arrested me and hit me with trafficking a controlled substance. Can Metro just stop anyone they want and search them? I wasn’t even doing anything wrong when they stopped me!”

Trafficking of methamphetamine is governed under Nevada Revised Statute (N.R.S. 453.3395) and is charged as a felony in Nevada. It is a serious crime and, depending on the weight of the drugs, could result in a maximum punishment of life in prison. However, based on what you just explained to me, Metro should have never searched you without your permission.

When can officers stop me?

Simply put, the 4th Amendment of the U.S. Constitution requires the government respect, “the right of the people to be secure in their persons against unreasonable searches and seizures.” What this means is, “ a police officer may stop a person and conduct a brief investigation when the officer has reasonable, articulable suspicion that criminal activity is taking place or is about to take place.” According to N.R.S. 171.123(1) a police officer may, “ detain any person whom the officer encounters under circumstances which reasonably indicate the person has committed, is committing, or is about to commit a crime.” In other words, if you were hanging out in front of the Bellagio and you match the description of a suspect who just robbed the art gallery inside, the chances are this adds up to enough, “reasonable, articulable suspicion” that gives Metro the right to stop and ask you for your ID, and is not “an inchoate and unparticularized suspicion or hunch.” This means an officer cannot stop you just because they feel like it. In other words, a police officer must have a reason that they can verbalize for them to stop you, and is more than just a random hunch.

Once the officers had your ID and realized you were not the John Doe they were looking for, the encounter should have ended. The next question you might ask, why did they keep searching me?

When can officers search me?

N.R.S. 171.123(2) permits police officers to engage in the pat down of a suspect if there is reasonable suspicion to believe the suspect is armed and dangerous. So is loosely matching the description of a suspect enough for police to detain and search you? Not exactly. Courts have determined, in order for a police officer to justify a search and seizure, it must be reasonable. Reasonableness will be determined with an objective eye in light of the totality of circumstances. So, what does that mean here? Well, if the officers believed they might have the suspect in a robbery, the suspect is in the area the crime took place, it is the evening, your clothes look baggy enough to hide things in, etc. this all adds up to reasons why they might have had reasonable suspicion to search you.

However, given the fact that you gave them your ID, and assuming there were no intervening circumstances before determining you were not the robbery suspect, they may not have had the reasonable suspicion necessary to search you at all and therefore, did not have the lawful authority to seize the dime bags of meth in your pocket.

“Stop and Frisks” or “Terry Stops,” as you may have heard them called, are not easy concepts to understand and are often overlooked by even attorneys who do not regularly practice criminal defense. The law gives officers wide discretion when stopping people in the street and not everything can amount to a seizure under the law. If you find yourself in a situation where a police officer has stopped and searched you, give us a call at Almase Law 702-463-5590. We will discuss with you the totality of circumstances in your encounter with the police, apply it to existing search and seizure law, and determine whether there was a violation of your 4th Amendment rights.